Recently a friend of mine expressed an interest in knowin g what the equation was for the night/day line on a rectangular map of the earth. For example: 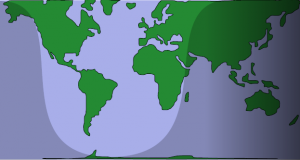 The line of night is generated by a projection of the Sun's light onto the Earth, which we will consider to be a perfect spheroid with semi-major axis of $latex R_1$ and semi-minor axis of $latex R_2$. If viewed from the "side" the line of night will appear to be a line with slope equal to that of the axial tilt (a.k.a obliquity) of earth. This is the inclination angle of Earth's planetary rotation axis in relation to its orbital plane, usually denoted by $latex \epsilon$ 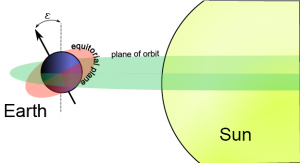 A typical map of the earth is a projection from spherical coordinates onto a cylindrical plane. This is done by drawing a rectangular image where the latitude ($latex \lambda$) is mapped to the x-axis and the longitude ($latex \phi$) is mapped to the y-axis (contrary to the coordinate system used by the digital imaging industry, here we describe the origin as being in the center of the image, with the positive x-axis being to the right, and positive y-axis being up).

Consider then a plane that is perpendicular to the earth's plane of orbit, and perpendicular to the vector pointing from the center of the earth toward the sun, and that intersects the earth at it's center. The line of night is the intersection of this plane with the Earth. From this observation we can develop an equation for the line of night in terms of $latex \phi$ and $latex \lambda$. 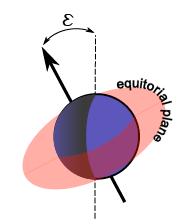 where the slope $latex s$ is related to the obliquity as

From the parameterization of a spheroid, we know that 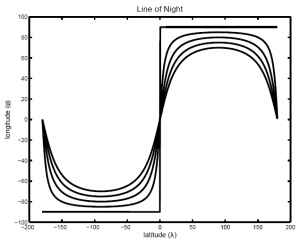 Which has exactly the shape we were looking for.